YOUR CHANCE — YOUR OPPORTUNITY — YOUR MOMENT

I bet you’ve realized what a diverse, interesting and talented group of people attend CUCC. But did you know how much fun they are?? Plan to attend the CUCC Party for Community on April 27 and you’re practically guaranteed to enjoy yourself and learn more about your church family.

We’ll be celebrating 21 years as an Open and Affirming church.  Tickets will be available soon.  Bring your family, your neighbors and your friends to the party for great food, great company and great opportunities.

Have even more fun when you purchase one of the many set priced future events or bid on special silent auction goodies.

We hope to raise over $10,000 for the operation of the church with part of the proceeds going to missions. This is a service project for all of us and there are many ways you can make it a success.

Here are some ideas:

Another way you can help is to donate a Silent Auction item – these will be physical things, destination trips or events that would be better purchased by one rather than many.  Perhaps a week in Santa Cruz or Hawaii, a lovely piece of jewelry, a special bottle of wine or a commissioned piece of art.  We’ll set the minimum bid and bid increment for each item.

Coming April 27!!   Our biggest fundraiser of the year!!!!!  It’s been 21 years since CUCC voted to become an Open and Affirming church – this is cause for celebration and a reason to bring back our Party for Community!!

There will be a festive atmosphere with dinner, entertainment, and the chance to bid on silent auction items and to sign up for parties, events and services scheduled for later in the year.

Tickets for the party will be priced at just $25/person with wine and beer available for purchase.  A percentage of the profit will be used for local and global missions.

Start thinking now of an event you could offer or help sponsor – how about a dinner party, tea, wine-tasting, winery tour, riverside picnic, evening at the opera or Philharmonic, brunch, spa experience, class or outdoor activity?

Be creative. We want to provide a year full of congregating possibilities, chances to have fun and get to know each other. Each event offered will have a limited number of participants at a set price per person. You’ll be able to buy an individual spot at an event or you can purchase all the reservations and invite your friends!!

Offering an event at the April 27 fundraiser is a wonderful way to share your talents and treasure with your church family.

We also need silent auction items. We’re looking for high-value items worth over $50 or items that can be combined to create a unique offering.

Do you have something special that needs a new home? Do you have contacts in the community you can ask for gift certificates and donations?

Put April 27 on your calendar and plan to come and Party for Community with your CUCC friends.  We promise you an evening of fun and the chance to participate in A Year of Congregating Opportunities.

We having been praying for our neighbor, Hope Lutheran Church, for the past few months, as they studied, prepared and voted on taking the faithful step of becoming in word and deed a Reconciling in Christ [their version of Open and Affirming] congregation within the Evangelical Lutheran Church of America (ELCA).

The congregation voted overwhelmingly in favor of Reconciling in Christ (72% for). Now the work begins for them. There was the expected loss of some congregants. There is the challenge of maintaining the ministry and mission of the church that remains unchanged: reflecting the love of God now even more fully and faithfully.

Hope Lutheran is a strong and faithful congregation. They have an excellent hunger ministry. We take our contributions of food for our narthex to their pantry for distribution to those in need.

We had the great opportunity and privilege of contributing testimony of our experience at an informational session at Hope a couple of months ago. We hope to be an encouragement to our sibling congregation through prayer and anything else they need during this moment of transition. Please pray for them ceaselessly.

Note: We of Community United Church of Christ will be celebrating our 21st anniversary of our faithful response to God’s call to be Open and Affirming at our COMING OF AGE banquet on Friday, April 26, 2019 beginning at 6 p.m. in Hayden Hall. 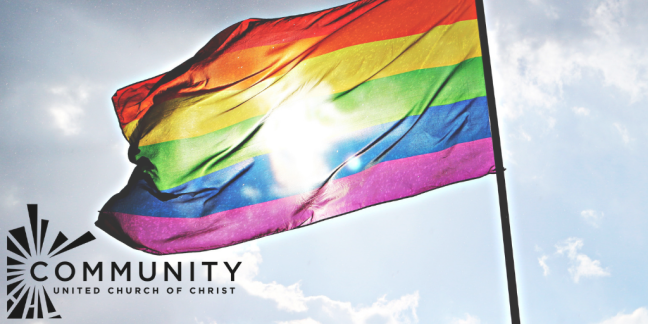 Their congregation is going through the process to consider becoming Reconciling in Christ (RIC), the Lutheran Church’s equivalent to our denomination’s Open and Affirming process (a public covenant welcoming into their full life and ministry to persons of all sexual orientations, gender identities and gender expressions). We were invited to share our experience about making that change in our church’s fabric in 1998.

We spoke to one of Hope Lutheran’s adult education classes. About 15 people heard our stories and recollections from that period. They asked us questions — many of the same questions we had when we went through the process.

“Listening to their concerns and fears reminded me of us 20 years ago,” Robin said. “I think it was helpful for their church to hear that we had those same fears and concerns and that we listened to our Still Speaking God and chose to walk in the ways of justice and love.  We chose to become an open and welcoming church and we are still here, still doing church 20 years later.”

Sharon described the steps we took on our own journey, led by our co-pastors at the time, the Reverends Gail McDougle and David Brown.

First, we did a book study of “What the Bible Really Says about Homosexuality” by Daniel A. Helminiak. Then Gail and David led four congregational meetings after worship on Sundays. The first two were biblically based, reviewing some of what we covered in the book study.

The third week was a powerful discussion with two children of our church — a young man and woman who told us what it was like to grow up coming to terms as a gay man and lesbian woman.

One question that comes up during this process is, “Why do we have to go through this? We are open and welcoming. Why do we have to take this official step?” But hearing from children who grew up among us disputed that, telling us that our informal acceptance didn’t feel very accepting at all.

The final week of those sessions was decision time. After going through the process — all of which took more than a year — we had to decide where to go from there.

The thing about going through all this turmoil is that you are going to lose some people either way. Some will leave if you go through with it, but if you don’t, after all that, some will decide that they can’t abide with staying if we can’t grow.

“We acknowledged the cost of faithful following as well as the cost in merely entering into the discussion,” Pastor Ara said. “The aim is not to make everyone happy, but to faithfully fulfill God’s will for God’s people.”

Some of the discussion at Hope Lutheran centered on what a different place we, as a nation, are in now compared to where we were 20 years ago. But that societal progress is not set in stone.

Lisa brought up President Trump’s recent move to roll back recognition and protections of transgender people. Our country may be a different place than it was in 1998, but in today’s political climate, the presidential administration is taking us backward every day. It’s more important than ever to take a stand for what’s right.

The Hope Lutheran members we spoke to seemed very appreciative of our viewpoints as they weigh this step for their congregation.

“Hearing from one another from different places on the journey of faith was a great blessing to me,” Pastor Ara said. “As the four folks from Community shared our story and engaged in dialogue as questions were asked and answered, it was clear that the Holy Spirit continues to move in a powerful way among bodies and hearts that are open.”

Hope Lutheran’s congregation will take this issue to a congregational vote on Wednesday, Dec. 5. Let us hold them in our prayers as they thoughtfully consider this step.

Join us for the 28th annual Fresno Rainbow Pride Parade & Festival Saturday, June 2, in the Tower District. The Parade starts at 10 a.m., and everyone is welcome to come march with us! The more the merrier!

We will be meeting at 930 a.m. by the dirt lot on the northeast corner of Palm and Olive avenues. The festival runs from 11 a.m. to 3 p.m. and we also need a couple people to help with the informational booth we will have at the festival.

We received the following letter as a Thank You from the Rev. Tory V. Topjian, a recent guest to worship with us on Jan. 14 and 21: 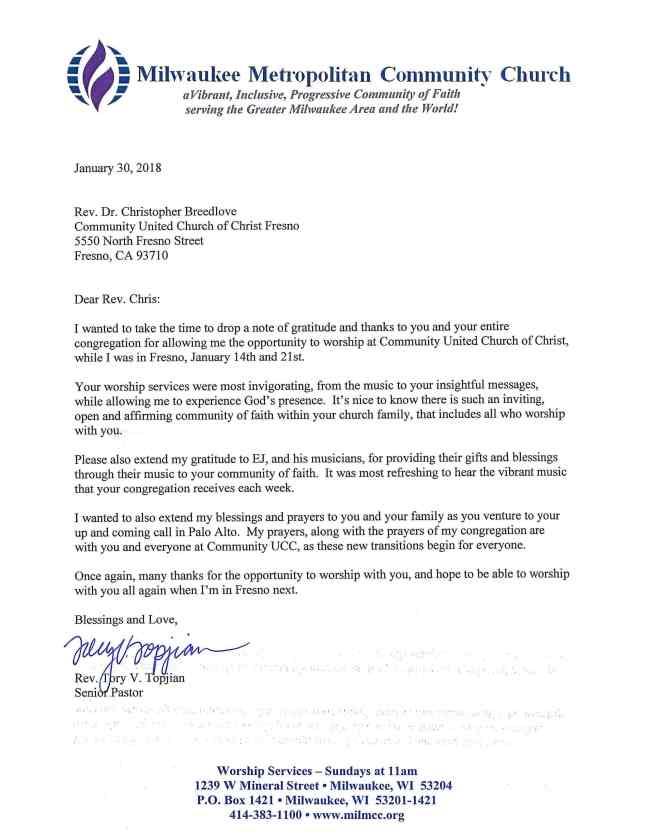 Community United Church of Christ is an open and affirming church that now permits serving alcoholic beverages and rents its Hayden Hall for weddings and receptions.

More than 20 members of our congregation came out to show their support for the Gay Pride Parade in Fresno’s Tower District on June 3. Thanks to Terry Cole, who shot this video from today’s event.

The Fresno Pride Parade will take place on Saturday, June 3rd. The Parade starts at 10:00 a.m. at the North East corner of Olive and Palm and goes to Maroa.

We also need your help to set up the booth at about 8:00 a.m. and to take it down at 3:00p.m. It is a great and easy way to connect with the community and let everyone know that our church is Open and Affirming.

View other recent worship services on our YouTube channel.

As we commit to making amends for a colonizing past and the genocide of indigenous peoples, we respect, honor and acknowledge the land we stand upon as Yokut Land. Click here to read more.

Keep up to date with all of the latest church news. We send out a weekly email newsletter on Thursdays. Contact Marilyn in the Church Office at 559.435.2690 or via email at office@communityucc.com to subscribe.

Past issues can be found on our News page.