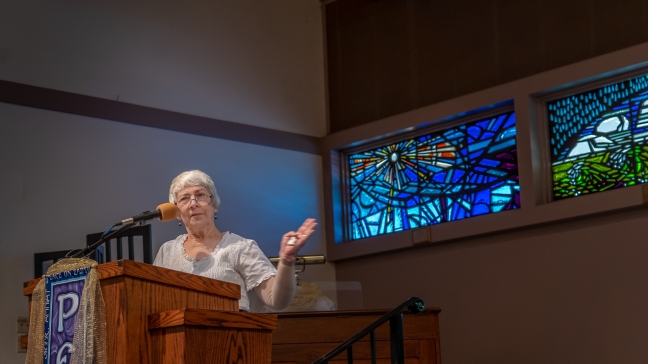 When I walk into our sanctuary and look at the stained glass windows, I often wonder how many people who are visiting or are new to our church realize that the windows depict the seven days of creation.

The windows came about when those of us who were members of Zion Congregational Church at the time decided we wanted to create something special for our sanctuary, namely stained glass windows.  Corky Normart is the artist we found and the one who suggested we consider doing the creation story.

Each of the windows in front of the church depicts one of the seven days of creation and is in memory of people who had been members of the church or were related to members.  There is a plaque under each window with the Scripture on which the window is based along with the names of the people in whose memory it is dedicated.

The windows are very special to me because I know almost every one of those people. 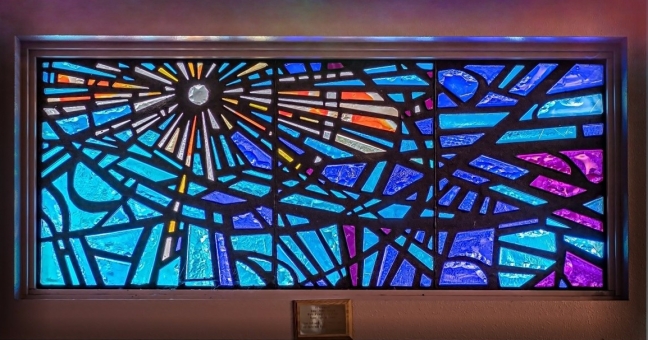 The first day is from Genesis 1:3 – In the beginning, God created the heavens and the Earth…
In memory of the three former pastors of Zion – Ferdinand Zahl, John Sauer and Abner Frost 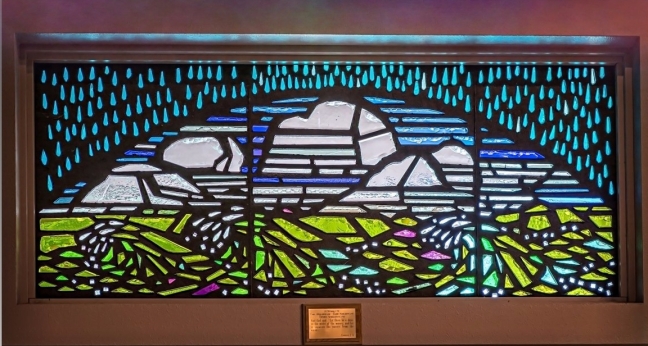 The second day is from Genesis 1:8 – And God said, “Let there be an expanse between the waters to separate water from water.”
In memory of Carl, Elsie and Dennis Schwabenland, father, mother and brother of Eileen White, a member of Community UCC. 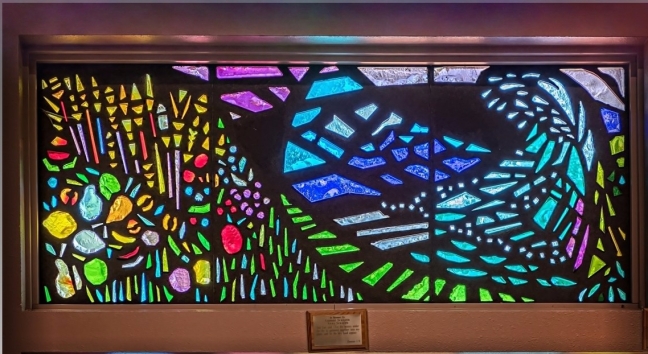 The third day is from Genesis 1:9 – And God said, “Let the water under the sky be gathered to one place and let dry ground appear.”  And it was so.
In memory of George and Ann Schafer, father and mother of Janice Perrigo, a member of Community UCC.

The fifth day is from Genesis 1:22 – God blessed them and said, “Be fruitful and increase in number and fill the water in the seas, and let the birds increase on earth.”
In memory of Mary and Goringer and Fred Ginther, members of Zion.

The sixth day is from Genesis 1:24 – And God said, “Let the land produce living creatures according to their kind:  livestock, creatures that move along the ground, and wild animals, each according to its kind.”  And it was so.
In memory of Phillip and Anna Krum, members of Zion.

The seventh day is from Genesis 1:31 – Then God looked over all he had made and it was excellent in every way.
In memory of Sandy Lust Meadows, daughter of Ken and Helen Lust, members of Community UCC.

In the narthex center, Genesis 2:3 – And God blessed the seventh day and made it holy, because on it, he rested from all the work of creating that he had done in creation.
In memory of Jack and Mollie Lust, father and mother os Ken Lust, a member of Community UCC.

Narthex left, Genesis 2:9 – And the Lord God made all kinds of trees grow out of the ground — trees that were pleasing to the eye and good for food.  In the middle of the garden were the tree of life and the tree of the knowledge of good and evil.
In memory of J. Henry Miller, Mary E. Miller, Elma Swinehart and Ralph Swinehart, family members of Zion.
In honor of the ongoing life of Zion by the Rev. Stanley Friesen and Delores Friesen.

Narthex right, Genesis 2:10 – A river flows out of Eden to water the garden, from there it divides and becomes four branches.
In memory of Ralph Ruby, husband of Marilyn Ruby, both members of Zion.

Narthex arch, Psalm 42:3 – My tears have been my food day and night, while men say to me all day long, “Where is your God?”
In memory of Jay Andrew Liberty, son of Susan Liberty, member of Community UCC.

There were four people whose memorial money was used to install the windows at Community UCC.  They are Jean Easterson, Edna and Tom Butler and Christopher Calderwood.

There were ten memorial windows from Zion with one from Community UCC.

All of these people whose memorials made these windows possible are no longer with us, but we are able to enjoy and appreciate their beauty because of those who have gone before us.

View other recent worship services on our YouTube channel.

As we commit to making amends for a colonizing past and the genocide of indigenous peoples, we respect, honor and acknowledge the land we stand upon as Yokut Land. Click here to read more.

Keep up to date with all of the latest church news. We send out a weekly email newsletter on Thursdays. Contact Marilyn in the Church Office at 559.435.2690 or via email at office@communityucc.com to subscribe.